Peter de Cestria or Peter of Chester or, as he styles himself in a charter recorded in the Coucher Book of Whalley Abbey, Petrus de Lascy rector ecclesie de Whalleye was probably an illegitimate son of John de Lacy (1192-1240). There is no recorded date for his birth but he was presented to Whalley as Rector by John de Lacy in 1235. This may have been when he came of age, making his birth date 1214.

He was the first and only Rector of Whalley. Previously the parish of Whalley had been under the administration of a Dean. A Dean was a lord of the manor who had been given ecclesiastical authority by the Bishop, who may or may not have been ordained as a priest, but was not required to be celibate until the Lateran Council of the year 1215 and up until that time the post was hereditary and passed from father to son. As those of you who have read my novel The de Lacy Inheritance will know the Dean of Whalley and his son Geoffrey play pivotal roles in the story. However, it is recorded that the last Dean died in 1249. This was a man by the name of Roger de Whalley. He was ordained as a priest and lived a celibate lifestyle. It seems that in 1235 he resigned his right to the rectory ‘wishing to please his kinsman, John de Lacy, lord of Clitheroe’ and became instead the vicar, with a share of the revenue from the church. (I think that this Roger was the son or the grandson of Geoffrey de Whalley which would have made him John de Lacy’s cousin, though I can find no definite evidence for this so far.)

It was common for wealthy families to present their bastard sons to rich benefices though how Roger de Whalley felt about having his cousin’s illegitimate son brought in as his overlord is not recorded. I wonder if he was placed under duress or if he was agreeable to an arrangement where he could concentrate on his priestly duties without having to worry about the administration of the lands. We’ll never know but I can already feel the novelist in me wanting to write more about these people and their relationships.

A Rector was an incumbent of a parish to whom tithes were paid and he could be a lay man who paid a priest to perform the duties that were required. John de Lacy arranged that 60 marks a year would be paid to Peter with the remainder of the revenues going to Roger de Whalley who was to be the vicar. Without knowing how much Roger received it’s difficult to tell if this seemed a fair share, though I suspect that Peter received a higher and regular income and that Roger’s portion was smaller and probably varied according to crop yields and market prices.

Although he lived an exceptionally long life, Peter was never ordained as a priest, although this did not prevent him obtaining a number of livings including Slaidburn and also being appointed as a provost of Beverley Minster. In 1287 the Archbishop of York appointed him to the Prebend of Bugthorpe which made him a Canon of York Minster. Pope Nicholas IV objected to this, partly because he had his own candidate for the vacancy, and also because he had discovered that Peter de Cestria was not a priest. Peter agreed to withdraw and promised to seek ordination as soon as possible. He was rewarded with appointments as a Prebendary at both Lichfield and Hereford Cathedrals – though he never did get around to being ordained.

He seems to have been more interested in secular affairs and both the king, Edward I, and Peter’s nephew Henry de Lacy, Earl of Lincoln, made good use of his diplomatic skills on various missions. He rose high in the king’s service, was involved in the reorganisation of the civil service and became First Baron of the Exchequer. Rather than being seen as a minor priest in a Lancashire backwater, Peter de Cestria was in fact a very powerful and influential man who used Whalley as his base but travelled widely and probably spent much of his time at court.

He was already an old man when Henry de Lacy promised the site at Whalley to the monks of Stanlaw Abbey to build a new abbey. He is described as being ‘an aged incumbent’ in 1283, but lived for another eleven years. This may have been through spite, as it is recorded that he was unhappy about the monks coming to Whalley and turned so many of the local people against the idea that when the monks did eventually arrive there was a very vocal demonstration in protest at their presence.

Peter de Cestria died on the festival of St Fabian and St Sebastion 1294 (20th January) and was buried at Whalley. It is likely that he was buried somewhere in the churchyard because in 1950 a tombstone which is thought to be from his grave was taken inside the church to preserve it and can now be seen near the font.

Amongst the ruins of the abbey at Whalley you can still see Peter de Cestria’s chapel which was built around 1249 and would have been a private chapel attached to his rectory. 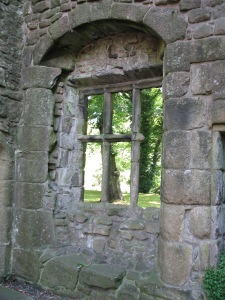