I visit a lot of old churches and most of them have plain white walls. But they weren’t always like that. Before Henry VIII’s reformation the walls of the churches were painted with scenes from biblical stories and the lives of the saints. They were bright, colourful, informative and entertaining. In fact wall paintings have been called the Bibila Pauperum – the poor man’s bible. In the days when many could people could not read, never mind afford to own something as expensive as a book, these paintings were used to educate and remind people about their faith.

Sometimes you find churches that have some vestiges of wall paintings such as St Wilfrid’s in Ribchester, Lancashire, but the best example I’ve seen is at the church of St Peter and St Paul at Pickering in north Yorkshire. When I walked in I was overwhelmed by the extent and the condition of the paintings. 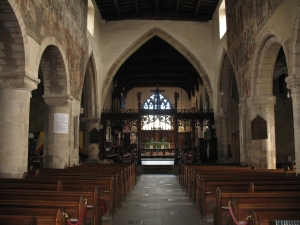 These paintings were commissioned around 1450 and painted over the next decade. Yet within a hundred years they had been covered and weren’t rediscovered until 1852 when a thick coat of plaster was removed from the walls of the nave. Many people came to see them, but they were subsequently whitewashed over as the vicar at the time, the Reverend F. Ponsonby, thought that they were a distraction from his sermons and ‘full of Popish superstitions’.

However a later vicar, the Reverend G.H. Lightfoot, agreed that the paintings should be restored during renovations in 1876.

Many of the paintings show the lives of saints:

A lot of them are fairly graphic too. If you study the one above you will see Catherine stripped to the waist and being flogged. Below we have the beheading of John the Baptist:

And here is St Edmund – stripped, tied to a tree and shot with arrows. He was later beheaded: 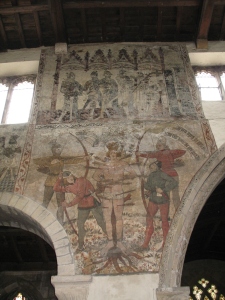 Perhaps all these scenes of martyrdom helped people come to terms with the closeness of death in those times. Death from disease, in childbirth and in battle was common and people may have taken comfort from the stories of those who had also suffered but who had found their place in heaven. There is also a graphic picture that warns what will happen to those who descend into the jaws of hell. So the pictures also served as a warning to live a good life.

It’s sad that so many other examples have been lost, but I was thrilled to see this one. Do go and have a look for yourself if you’re ever in the area. The real thing is much better than my photos.