One hundred years ago today, on the 21st December 1910, at ten to eight in the morning, a huge blast ripped apart Hulton Colliery at Westhoughton in Lancashire, known locally as the Pretoria Pit. Deep underground a roof in a tunnel fell in and set off a chain of events that culminated in the explosion of methane gas and coal dust. Local man, Brian Clare, recalls that his mother still had vivid memories of that morning. As she was getting washed in the kitchen ready to go to school, the force of the explosion blew her off her feet.

The pit employed 2500 men and boys from the local area and on this particular morning the day shift had just begun and 898 men and boys, some as young as only twelve years old, were working down the mine. News reports of the time say that some of the miners had complained about gas and hot air in the mine and the coroner’s report, prepared by Mr Redmayne, noted that a large fall of the roof ‘some twenty yards long at No.2 face of the North Plodder had not been completely removed’. There was also a mention of miners seeing sparks coming from the conveyor belt switch at the No.1 face of the North Plodder which suggests that it was defective. The final conclusion of the inquest was that the roof collapse had caused the build up of gas and that a faulty lamp had ignited it.

News of the disaster quickly spread and men, women and children ran to help, but there was little they could do as the dead and dying were brought to the surface. During the day 553 miners were rescued but there were only two survivors from the level where the explosion occurred and a total of 344 men and boys were killed.

The funerals began on Christmas Eve; there were even funerals on Christmas Day and the disaster is remembered by locals as ‘Black Christmas 1910’. What people must have gone through during that Christmas is unimaginable and the loss of so many men and boys must have shaped the way Westhoughton has developed over the last hundred years. One woman lost her husband and four sons, the youngest of whom was just twelve and had gone down the pit for the first time that day.

The Pretoria Pit Disaster was the third largest pit disaster in British history and the worst in Lancashire. The loss of life was the largest in any English coalmine.

A relief fund was set up for the families and dependants and a total of £145,000 was raised. The marble memorial which cost £200 has this inscription:

‘Sacred to the memory of 344 men and boys who lost their lives by an explosion at the Pretoria Pit of the Hulton Colliery Co. on the 21st December 1910, 24 of whom sleep under this monument, being unidentified at the time of burial. This monument is erected by public subscription as a token of sympathy with the widows and relatives of the victims, 171 of whom are buried in this cemetery, 45 in Wingates, 20 in Daisy Hill, 3 in the congregational churchyards, and the remainder in various burial grounds. “Be Ye Therefore Ready Also For The Son of Man Cometh At An Hour When Ye Think Not.” St Luke Xll .40’ 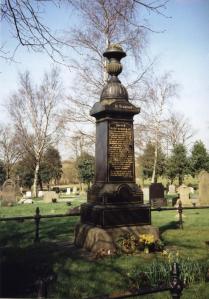 It was visited by thousands of grieving people in the days after its erection and the anniversary of the disaster is still remembered in an annual ceremony when a wreath is laid. A memorial service was held on Sunday and a new statue has been unveiled in memory of all those who lost their lives.