From around half past five until six o’ clock in the morning of 6th June it will be possible to observe, from Lancashire, the last stages of the transit of Venus across the sun.  What is remarkable about this event is that it was from Lancashire that the transit was observed for the very first time, back on the 24th November 1639 by Jeremiah Horrocks.

Jeremiah Horrocks came from Toxteth, which at that time was a small hamlet near Liverpool, and his father, James Horrocks, was a watchmaker.  Jeremiah Horrocks, registered as Horrox, entered Emmanuel College, Cambridge, as a sizar on May 11th 1632, at the age of fourteen.  A sizar was a poor student who couldn’t afford to pay fees, but who could earn his keep and gain his education by performing chores.   Although he was fascinated by astronomy there was no such course taught in British universities so Jeremiah Horrocks began to educate himself on the subject and wrote in a letter to his friend William Crabtree: “I was much pained not to have anyone to whom I could look for guidance, or indeed for the sympathy of companionship in my endeavours…”

By 1639, Jeremiah Horrocks was living at Hoole, near Preston, where it’s believed that he

was the curate at the church of St Michael.  He may also have been a tutor to the children of John Stones of Carr House where he was lodging and from where he made his observations from the small window above the front door.

The astronomer Kepler had predicted a transit of Venus in 1631, although this wasn’t visible from Europe.  After having studied Kepler’s calculations Horrocks realised that the Transit always occurs twice, with an eight year gap.  There had been a transit in 1631 and so the next was due that same year, 1639.  It would occur again in 1761/69, then 1874/82 and more recently we saw it in 2004 and it occurs again this year.  In fact it was Horrocks’ prediction that a transit of Venus would occur in 1769, but only be visible on the other side of the world, that was one reason Captain Cook’s scientific expedition to Tahiti was organised.

In his work Venus in Sole Visa (Venus on the face of the Sun, which was published in 1662 after his death) Horrocks says:  “I watched carefully on the 24th from sunrise to nine o’clock, and from a little before ten until noon, and at one in the afternoon, being called away in the intervals by business of the highest importance which, for these ornamental pursuits, I could not with propriety neglect.”

Understanding the dangers of looking directly into the sun, Horrocks made calculations and traced a circle on some paper and watched as the shadow of Venus moved across the sun.  He wrote: “About fifteen minutes past three in the afternoon, when I was again at liberty to continue my labours, the clouds, as if by divine interposition, were entirely dispersed, and I was once more invited to the grateful task of repeating my observations.  I then beheld a most agreeable spectacle, the object of my sanguine wishes, a spot of unusual magnitude and of a perfectly circular shape, which had already fully centred upon the sun’s disc on the left, so that the limbs of the Sun and Venus precisely coincided, forming an angle of contact.  Not doubting that this was really the shadow of the planet, I immediately applied myself sedulously to observe it.”

Horrocks could only watch for around another thirty minutes though because then the sun set, but it was long enough for him to make his observations and calculations which are recorded in his book.

In 1874, after much lobbying, a memorial was mounted in Westminster Abbey opposite that to Newton.  It reads: “In memory of Jeremiah Horrocks, Curate of Hoole in Lancashire who died on 3rd of Jan, 1641 in or near his 22nd year.” 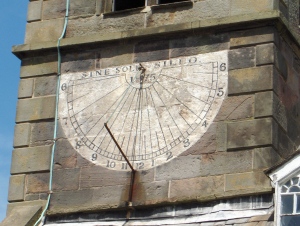 Horrocks.  Its Latin inscription Sine Sole Sileo means ‘without the sun I am silent’. He is commemorated within the church on a marble plaque and in a stained glass window at the east end of the church, which shows him observing the Transit of Venus.  Jeremiah Horrocks  also has a crater on the moon named after him.

4 thoughts on “Jeremiah Horrocks and the Transit of Venus”