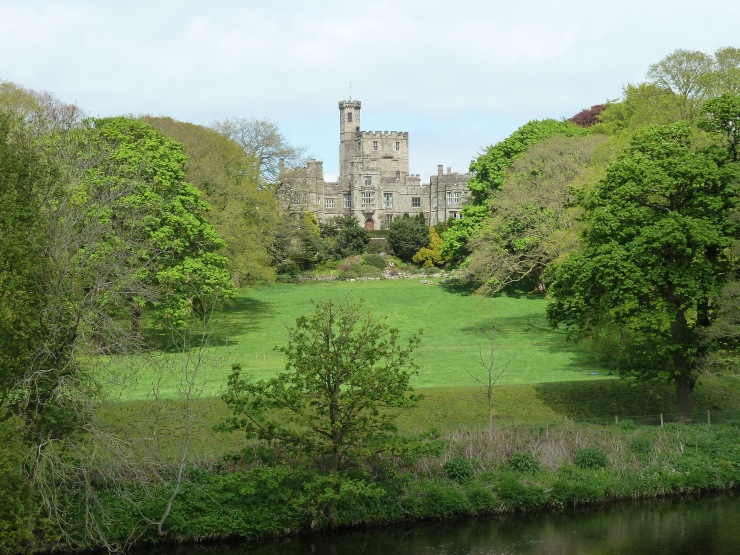 My latest novel By Loyalty Bound begins at Hornby Castle in Lancashire in 1470. At that time it belonged to the Harrington family.  But who originally built it? And what happened to it after the Tudors became the kings of England?

In William the Conqueror’s Doomsday Book, Hornby is recorded as one of three manors – Melling, Hornby and Wennington– belonging to Ulf.  By 1086 the land was in the possession of the king and he granted it to the Montbegon family who built a castle here, and founded a priory and a borough. The castle was passed down through the Montbegon family until 1226 when Roger de Montbegon III died without issue. The heir was Henry de Monewdon and in 1229 he granted the manor of Hornby to Hubert de Burgh, Earl of Kent, and Margaret his wife.  The agreement included the castle, honour and soke, the advowson of the priory, the manor of Melling and the advowson of the church with the lands of Wray, Wrayton, Cantsfield, Wennington, Old Wennington, Tunstall, Arkholme and Farleton. The service due was half a knight’s fee.

Hubert de Burgh was followed by a son and grandson both named John. The grandson died in May 1243, leaving three daughters. The castle then passed into the Lungvillier family probably by marriage and in 1279 passed to the Nevills by the marriage of Margaret de Lungvillier to Geoffrey de Nevill, who was related to the Nevills of Raby.  The last of the Nevills of Hornby, Sir Robert Nevill, had a grand-daughter Margaret who married Thomas de Beaufort, 1st Duke of Exeter, who was the illegitimate son of John of Gaunt and his mistress Katherine Swynford. They had a son named Henry, but he died as a child and after the deaths of both Margaret and Thomas, Hornby Castle passed to her aunt, sister of Sir Robert Neville and also called Margaret, who was married to Sir William Harrington.  Sir William Harrington was a standard bearer at the battle of Agincourt. It was his son, Sir Thomas Harrington and grandson, John Harrington, who both died at Wakefield in 1460, causing the lands to be inherited by John’s young daughters Anne and Elizabeth.

The manor of Hornby passed to Anne Harrington and it was by her marriage to Edward Stanley, a son of Lord Thomas Stanley, first Earl of Derby, that Hornby Castle came into the possession of the Stanley family. This inheritance was questionable because of various forfeitures of lands after the battle of Bosworth, and Henry VII confirmed the grant of Hornby to Edward Stanley who later excelled in battle at Flodden Field and was made Lord Monteagle. Anne Harrington died without giving Edward any children and although her sister Elizabeth, her niece Jane, and other members of the Harrington family tried to claim back the inheritance it passed to Thomas Stanley, a son of Edward by his second wife, Elizabeth Vaughan.

His son Thomas was only ten years old at the time and his wardship was granted to Sir Thomas Darcy, Sir John Hussey and Alexander Radcliffe.  Thomas died at Hornby in 1560 and asked to be buried in the church at Melling.  He was succeeded by a son, William.  William mortgaged and sold off portions of the estate and by his death the holdings were diminished. By his wife, Anne, a daughter of Sir John Spencer of Althorpe, he had a daughter, Elizabeth.  She married Edward Parker, Lord Morley, and their son, William, was summoned to Parliament in 1604 as Lord Monteagle.  He was the man who sent the warning letter to King James that prevented the success of the Gunpowder Plot.

William’s son, Henry, was a Roman Catholic and in 1625 Hornby Castle was searched for arms and a seizure was made. At the outbreak of the Civil War, Henry declared for the Royalists and Hornby Castle became a refuge for many of the Royalist ladies of the area.  But in June 1643, Colonel Assheton, with the help of a deserter from the castle, succeeded where the Stanleys had failed in the 1470s and the castle was taken when men were led in through a window after climbing the precipice. The castle was ordered to be ‘defaced, dismantled and rendered defenceless’.

Following the Civil War the castle was abandoned and allowed to fall into ruin.  It was later recovered by the family but Henry’s son Thomas was forced by his financial circumstances to sell it to Robert Brudenell, 2nd Earl of Cardigan in 1663. His grandson sold it to Colonel Francis Charteris, who partly rebuilt it. In 1730, Charteris was convicted of the rape of one of his servants, Anne Bond. It should have carried the death penalty but he got away with a short stay in Newgate Gaol before receiving a royal pardon. When he died two years later, a mob tried to attack his coffin as his body was taken for burial in Edinburgh Greyfriars, and dead cats were thrown into his grave.

Charteris’ daughter, Janet married James Wemyss, 5th Earl of Wemyss and the castle passed to their second son Francis, who took his mother’s maiden name of Charteris.  In 1789 he sold Hornby Castle to John Marsden of Wennington. He was known locally as ‘Silly’ Marsden and was incapable of conducting his affairs.  He lived with his brother Henry and his aunt, Sarah Cookson, who fell under the influence of George Wright, who was a servant of Henry.  He was about 30 years younger than her, but seems to have shared her bed as well as her money. After Henry’s death, Sarah became John’s guardian and George Wright became head of the household. When John Marsden died, his will put George Wright in control of his manor. It was contested by Admiral Sandford Tatham, an uncle by marriage, and the case of Tatham v. Wright was discussed at dinner parties nationwide and followed in detail by The Times. Eventually, the courts found in favour of Admiral Tatham and Hornby Castle passed to him.  When he died at Hornby in 1840, aged eighty-five, the castle passed to his relative, Pudsey Dawson, whose nephew sold it to John Foster, a mill owner from Bradford. There is a story that Foster bought the estate whilst dressed in working clothes and paid the deposit with cash from his cloth cap.

Hornby Castle is now privately owned by Foster’s descendants.  It is not open to the public, but the gardens are open for a couple of weekends each year.  The house was mostly rebuilt in the 18th and 19th centuries in a Gothic style by Lancaster architects Sharpe and Paley with further alterations by Paley and Austin in 1889-91. It is constructed from sandstone rubble with slate roofs and is on an irregular plan, with a broad entrance front behind which lies the hall, and a tapered courtyard behind containing the keep which dates back to the 16th century and was built by Edward Stanley.  It has undergone restoration and all the windows, except for three small ones at the back are new. But a carved panel bearing the Stanley emblem of an eagle’s claw and Edward Stanley’s motto ‘Glav et gant’ (sword and glove) remain, as well as a carved eagle’s claw in one of the upper rooms.

23 thoughts on “A Brief History of Hornby Castle in Lancashire”