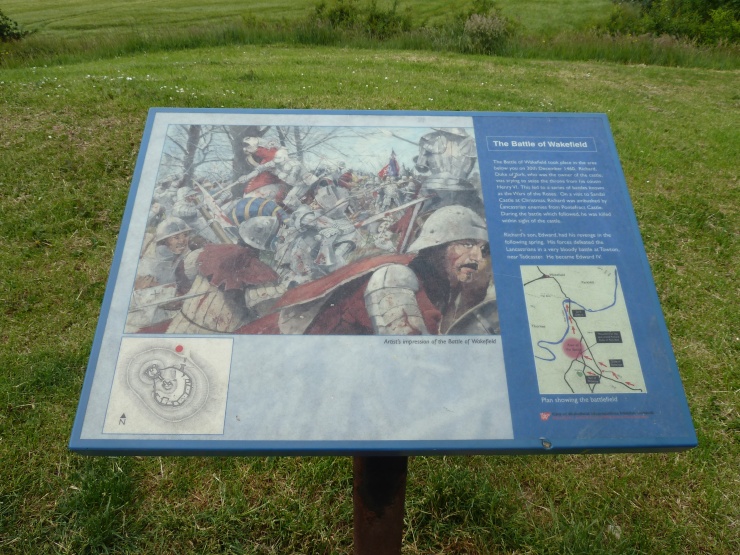 Although By Loyalty Bound opens in 1470, it is the events that took place ten years earlier  at the Battle of Wakefield that led to the Harrington family losing their castle and lands at Hornby in Lancashire.

The Battle of Wakefield, fought on 30th December 1460, between the Lancastrian and Yorkist claimants to the throne of England was the fourth in a series of battles that are now known as the Wars of the Roses.

The Lancastrian king, Henry VI, suffered from a mental illness and for fourteen months from the end of 1453, Richard, Duke of York, ruled as Lord Protector. Then in January 1455, Henry made a recovery and everything changed. The Duke of York’s enemies were once again in control and war broke out between the opposing houses of York and Lancaster.

Richard, Duke of York believed that his claim to the

throne surpassed that of Henry’s and he wanted to be king. He took a major step towards achieving his ambition when his forces overcame the Lancastrians at the Battle of St Albans and he resumed his protectorate.   But in 1456, King Henry, probably under instruction from his wife Margaret of Anjou, claimed back his throne, telling parliament that he was well enough to rule.

The Duke of York retreated north to Sandal Castle. His supporters also left London: Richard Neville, the Earl of Salisbury, returned to Middleham Castle in North Yorkshire and Salisbury’s son, the Earl of Warwick, returned to his position as Captain of Calais. However, the Lancastrian nobles brought charges of treason against the Yorkists and this led to the Battle of Blore Heath. It was a Yorkist victory, but the Lancastrians followed the Duke of York back to his castle at Ludlow. There was more fighting at Ludford Bridge. The Lancastrian army was victorious and the Duke of York was forced to flee to Ireland with his second son, Edmund, whilst his eldest son, Edward, escaped to Calais with Salisbury and Warwick.

But the Yorkists did not accept defeat. The Earl of Warwick led an invasion force and fought the Lancastrians at the Battle of Northampton. The Yorkists won and King Henry was once again taken into their protection. The Duke of York returned from Ireland, thinking to take the throne, but found he did not have enough support from the lords. Eventually, both the Lords and the Commons acknowledged the Duke of York’s superior claim to the throne through his descent from Edward III, and on 24th October 1460, Parliament passed the Act of Accord in which it was agreed that Henry would remain king until his death and then the crown would pass to York and his heirs.

King Henry’s wife, Margaret of Anjou, was not happy with this arrangement as it meant that her son, Prince Edward, was removed from the line of succession.  She began to gather supporters in Wales and Scotland and across the north.  Northern lords including Henry Percy, the Earl of Northumberland and Lord Clifford of Skipton Castle began to gather armies and marched to surround York’s castles at Pontefract and Sandal.

The Duke of York, sent his eldest son, Edward, to put down a rebellion in Wales and with his second son, Edmund, managed to reach Sandal Castle on 21st December 1460. It was poorly prepared as the constable had been prevented from collecting supplies by the presence of the Lancastrian army. The Yorks spent Christmas under siege with their food supplies dwindling.

On 30th December a foraging party was sent out to find food, and although a truce had been agreed over the Christmas period, it came under attack from Lancastrian forces. Watching from the castle, the Duke of York saw another force join the fray and, thinking that it was reinforcements led by Lord John Neville, he gathered his available troops and led them out of the castle to join the fighting. Amongst the men who rode with York were his son Edmund, Sir Thomas Harrington, an experienced retainer of the Neville family and his son, John Harrington.

As they fought, more and more Lancastrians arrived and it became obvious that the Yorkists were surrounded and would be defeated. The Duke of York, put his young son Edmund into the care of his tutor, Sir Robert Aspall, and told them to flee the battlefield. Lord Clifford saw them leave. He followed them as far as Wakefield Bridge where he killed them both. The Duke of York was unhorsed, received a sword wound to his knee and was hacked to death. Half the Yorkist army, almost 3000 men were killed, including Sir Thomas Harrington whose son, John Harrington, died later from his wounds – a turn of events that would lose the family their castle at Hornby.

The Earl of Salisbury was taken to Pontefract Castle and executed. The dead were also taken to Pontefract and the heads of Richard, Duke of York, his sixteen year old son, Edmund, Earl of Rutland, and Sir Thomas Harrington were hacked from their bodies and taken to York where they were displayed on spikes on Micklegate Bar.

The brutal slaughter of the Yorkist nobles, rather than holding them for ransom as was the usual practice, resulting in the uncompromising killing of as many Lancastrians as possible at the Battle of Towton, 1461, by the Duke of York’s eldest son, Edward. That battle resulted in him taking the crown as Edward IV, but a rebellion by the Earl of Warwick, who had done so much to support the Yorkists, meant that the wars went on and on.  It was not until Richard III’s defeat at Bosworth at 1485 that the beginning of the Tudor dynasty brought them to a close.