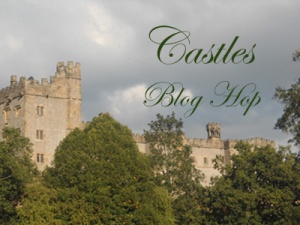 23rd September sees the publication of Castles, Customs and Kings

– a collection of true tales by English historical fiction authors. My contribution to the book is Two Legends; Two Outlaws where I talk about Robin Hood and Sir William Bradshaw. There are lots of other gems in the book from some well-known historical authors so it’s well worth getting hold of a copy. It’s the sort of book you’ll keep on your shelf and refer back to time and again.

You can buy it from Amazon here

To celebrate publication day, the contributing authors are taking part in a blog-hop about castles. See the bottom of the post for the links to the other articles.

My choice is Pontefract Castle.

It isn’t as well-known as places like Warwick Castle and the Tower of London, which are better preserved, but at one time Pontefract was one of the most important castles in England.

Like most English castles, Pontefract began as a timber castle on a mound surrounded by a bailey.

That castle was built around 1069/70 by Ilbert de Lacy, who had accompanied William on his Norman Conquest. Ilbert’s reward was extensive lands in the north of England in what is now Yorkshire and east Lancashire.

The first castles built after the Norman Conquest were mostly  constructed from wood, brought in a type of medieval pre-pack form from Normandy, and local people were forced to help to construct them.  But wood was prone to fire and to rotting in the damp English air, so over the next century the wooden structures were replaced with stone for greater strength and permanence.

The impressive towers of the outer walls at Pontefract can still be seen, but there is little left within

them and no sign of the great hall that would have been the central focus of life here in the middle ages. But you can see the remains of one of the earliest stone buildings within the castle, which was a chapel dedicated to St Clement.

Parts of the towers and the kitchen block also remain, although it is possible that there are more remains below the grassy surface. The cellars which were cut from the bedrock beneath the bailey still remain. They were used as a magazine (military store) from medieval times until Civil War and on certain days they are open to the public and you can go down the steps to see where Civil War prisoners carved their names into the cell walls.

The castle passed down through the de Lacy family. You can read more about them here.

When Alicia, the daughter of the powerful Henry de Lacy, married Thomas, Earl of Lancaster, the marriage settlement included an agreement that the de Lacy lands would pass to her husband, and when Thomas turned against King Edward II and was beheaded as a traitor, on the hill outside Pontefract Castle, in 1322, the lands were confiscated. (Look out for a forthcoming novel of mine that will tell Alicia’s story.)

Pontefract Castle was later returned to the Earls of Lancaster and became part of the Duchy of Lancaster when it was created in 1351.  The Dukes of Lancaster went on to become kings (and queens – the present Queen Elizabeth II is the Duke of Lancaster) of England when Henry Bolingbroke, the son of John of Gaunt, forced the abdication of his cousin Richard II, who died at Pontefract Castle after being starved to death.

Major building work took place between 1399 and 1405 when the Swillington Tower was built and the king’s great kitchen. It

was a huge and prestigious palace and what remains today can only hint at its past grandeur.

The castle was an important royal base for military activities in times of unrest and was often used as a prison.  James I of Scotland was held her and Charles, Duc d’Orleans, after his capture at Agincourt in 1415. During the Wars of the Roses it was used at times as a Lancastrian stronghold and in 1460, the Lancastrian army came from Pontefract to the battle of Wakefield where they won a victory over the Yorkists, killing Richard, Duke of York and many others including Thomas and John Harrington. (Read my novel By Loyalty Bound for more about the story of the Harringtons and their links with Richard III)

Later, when the Yorkists came to the throne, Richard III, whilst he still the Duke of Gloucester, used Pontefract as one of his official residences and his illegitimate son, John of Pomfret is thought to have been born here.  In 1483 when Richard took the throne he had three of his opponents executed at the castle, including Anthony, Earl Rivers, the uncle of the deposed Edward V.

During the Civil War, Pontefract Castle was held for the King.  It withheld three sieges but was finally forced to surrender in 1649.  Like many other castles, its destruction was ordered by Oliver Cromwell so that it could not be used a stronghold against him again.

In later years the bailey was filled with soil and used to grow the liquorice for which Pontefract has become famous.

The castle is now a scheduled ancient monument in the guardianship of Wakefield Council, although it remains the property of Her Majesty the Queen as part of the Duchy of Lancaster.  It is free to visit and an excellent visitor centre has recently been opened. You can find the Pontefract Castle Facebook page here. 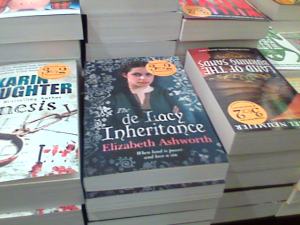 that I will give away to one lucky reader! Leave your name in the comments and I will pick one at random and post the winner here on 31st October 2013.