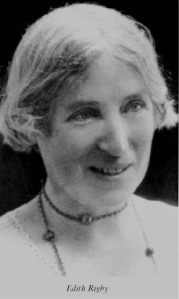 The Preston born suffragette, Edith Rigby, liked to be known as Mrs Edith Rigby. Conventionally she should have been known as Mrs Charles Rigby, the doctor’s wife. Women only reverted to their own Christian name on becoming a widow, but Edith wasn’t prepared to wait that long to regain her own identity. Besides, she wanted a vote!

Edith was the second of seven children born in 1872, in Preston in Lancashire. Her different way of looking at life, and in particular the role of women, was evident from an early age. Even as a child she questioned the division between the working women with their clogs and shawls and the ladies of leisure who paraded through Miller Park in their silks and satins.

On the Christmas morning after her twelfth birthday Edith was missing from the house when her family got up. She arrived home later to explain to her parents that she had been out distributing small gifts of chocolate, soap and candied fruit that she had been collecting over the preceding weeks to work people in the streets as they made their way to Mass.

The desire to help others was one that stayed with Edith all her life, although it is her newsworthy exploits in the pursuance of votes for women for which she is more readily remembered. Less is known about her love of fell walking, her distaste for having skirts flapping around her ankles, her penchant for wearing only sandals on her feet, her prowess as a swimmer and the fact that she was the first lady in Preston to ride a bicycle, in bloomers, a habit which was regarded as being improper and for which she was booed and pelted with vegetables.

Although Edith showed far more interest in other’s welfare than she ever did in men, she attracted many admirers and in September 1893, a month before her twenty-first birthday she married thirty-four year old Dr Charles Rigby and went to live with him at 28 Winckley Square in Preston. Her marriage, however, was far from conventional. Edith did not take on the traditional role of a middle class housewife, but busied herself trying to improve working conditions for girls and women in the local mills. She also continued her own style of living by renting a bungalow at nearby Broughton where she grew fruit and vegetables and spent much of her time.

She began a club for girls, where they could meet to sew, sing, play games and continue with an education that was curtailed for most of them at the age of eleven when they began to work part-time in the mills.  Edith taught them about hygiene, took them swimming, taught them to play cricket in the park and bullied the owners of large country houses to hold garden parties on summer Saturday afternoons.

But it is for her involvement with the suffrage movement that Edith Rigby is best known. Never one to take up a cause without giving it her best attention, Edith is famous for the burning of Lord Leverhulme’s bungalow at Rivington and her hunger strikes which accompanied her many episodes of imprisonment.

She also planted a bomb in the Cotton Exchange in Liverpool as Sam Caslin explains in this short video:

Edith was sent to prison the first time after rising at half past five one sleety morning in February 1907 to take part in a suffragette march from Hyde Park to Caxton Hall, where the protesters tried to form a ‘Women’s Parliament’. Edith, along with Christabel and Sylvia Pankhurst and a handful of other women continued the protest to the Houses of Parliament, but rows of police forced them back to Caxton Hall, where fighting broke out and fifty-seven women were arrested. Given a choice between paying a fine or serving a month in prison, they all chose prison and Edith, who had been a prison visitor at Preston, now found herself on the other side of the bars.

“Prison is hopeless as a place of reform,” she told a press reporter on her release. And it certainly didn’t change Edith Rigby, because she went there again and again.

The hunger strikes were begun by a Miss Dunlop who refused to eat when her request to be treated as a political prisoner was denied. She fasted for four days of her month long sentence and was released. The suffragettes realised that this was a powerful weapon and from then on hunger strike was the unspoken order. And the government, given the choice of enfranchising women or letting them die, began a regime of force feeding.

Hunger strikers who resisted were held down by four wardresses whilst a doctor inserted a tube down their throats and a fifth wardress would pour in liquid. Later, when even this barbaric treatment failed to deter women from their aim, an Act of ‘cat and mouse’ was introduced, where women in danger of death after several days without food and water, were released to recover their health before being re-arrested to continue their sentences.

Despite all the campaigning and arson and imprisonments, it was probably the First World War that was the catalyst for some women at least to gain the vote. In 1914 an uneasy truce was called between the suffragettes and the government. The country needed women to fill the jobs of the men who had gone to fight. Nine months after the Armistice women over thirty who were local government electors (or wives of electors) were placed on the voters’ register, but it wasn’t until 1928 that women were allowed to vote on equal terms with men.

After the war, Edith Rigby turned to farming and became increasingly interested in the teachings of Rudolph Steiner.  One of her friends commented “After the vote was won she gave up all her good works and took up with Rudolph Steiner.”

She cut her hair short, wore men’s clothes and bought a small holding just off the Preston to Southport road where she grew fruit and vegetables and kept animals and bees. Her methods nowadays would be called organic and following Steiner’s teachings she strove to produce good wholesome food, using no artificial means.

Strangely her marriage to Charles Rigby was a happy one.  He eventually retired and went to live with her at the cottage known as ‘Marigold’ and although they had no children of their own they adopted a son, Sandy. Edith liked children and many of her nieces and nephews spent their summers with her where she taught them about nature and the universe.

In 1926 she moved to North Wales where she had been educated at Penrhos College as a girl. Sadly, her husband died just before the move, but Edith went anyway, to the place where she could walk in the mountains.

Here she soon surrounded herself once more with like minded people.  She formed an ‘Anthroposophical Circle’ and her house was always filled with visitors, much as Winckley Square had been in the days of the suffragette movement.  She bathed in the sea every morning, both summer and winter and took her visitors on long fell walking expeditions through the mountains. Edith also became interested in Steiner’s educational beliefs and visited New York to see one of his schools.

Even when she was past seventy she rose every morning at 4 a.m. to meditate. But old age and Parkinson’s Disease was something Edith Rigby found it impossible to campaign against and she eventually died at her house near Llandudno in 1948.

In her book ‘My Aunt Edith’ written by Edith Rigby’s niece, Phoebe Hesketh the author says “She had to be different and live differently from the rest of us.  And yet we never thought of her as a crank. She was a person who made her presence felt, a dropper of stones into a pool whose ripples still have the power to disturb.”.

*My Aunt Edith – the Story of a Preston Suffragette by Phoebe Hesketh was published by Lancashire County Books, Bow Lane, Preston. It is now out of print but your local library may be able to source a copy. I can highly recommend it if you can get hold of a copy.

You can also read about Edith Rigby and other notable Lancashire born women and men in my own book Champion Lancastrians.

1 thought on “The Preston Sufragette”